Gilson first brought you a behind-the-scenes look at the impressive renovation of the former Heritage Towers (now The Milton) in Battle Creek, MI back in June of 2020. That project is now gaining national recognition, and was unveiled as one of 12 winners of the 3rd Annual Best of Wide Format Awards competition by Big Picture magazine. 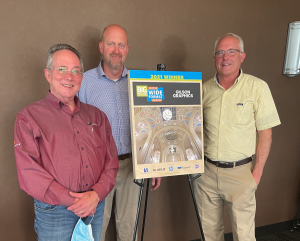 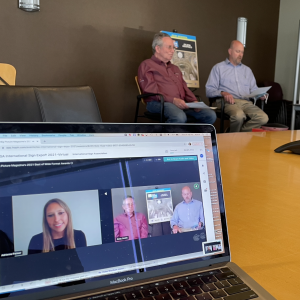 Gilson was presented with the award on Wednesday, April 7 during the ISA International Sign Expo virtual event.

To check out the complete story and before-and-after imagery, check out our original post at Preserving Heritage.

During the ceremony, the team gave a shout out to the many incredible individuals who played a part in the project’s success:

The project was a fantastic opportunity to showcase our abilities not only as a wide format printer but also as problem solvers and creative thinkers. Using the tools of our trade to solve modern day challenges is a skill that continues to serve us well, and that we are proud to invest in time and time again for the betterment of our customers and our communities.

You can also read the full, reprinted with permission from BigPicture.net, in the text below or by visiting their website.

In February 1931, thousands of Battle Creek, Michigan, residents headed downtown for the grand opening of the 19-story, Art Deco Old Merchants National Bank and Trust Co. Building, featuring the first escalators in a bank building in the US. After numerous name changes, owners, and failed renovations, the tallest building in Battle Creek sat empty and condemned, though listed in the National Register of Historic Places in 2018.

Developer Mark Harmsen acquired the aging downtown gem – renamed The Milton to honor Battle Creek’s origin as the Village of Milton in the 1830s – and sought to restore it to its former glory. Harmsen tapped local marketing service provider Gilson to revive the iconic 45-foot arched ceilings of the former bank foyer, working closely with the town’s historical society to “recreate the historical Art Deco designs on the ceiling in a faster and more cost-effective manner,” says Dan Amidon, Gilson’s lead installer.

After weeks of brainstorming and testing, the team landed on a unique method: creating a cut vinyl template to apply to the ceiling to guide painters. Grand Rapids’ Post Art Studio (postartstudio.com) recreated more than 65 images from historic photos, which Gilson Graphics used to craft large-format cut-vinyl stencils with General Formulations 851 Yellow Paint Mask vinyl and the shop’s Graphtec FC-8600-160 cutting plotter. Installers worked on a rolling scaffolding placed on top of a 40-foot platform, using laser levels as guides to place the graphics on the 5000 square feet of rough, concave arches and domes before painting a brown outline and then removing all vinyl from the ceiling.

“We quickly realized the space was not consistent in size or shape. One space would be off as much as a foot from the ‘same’ space on the other side of the building,” says Amidon.

“We had to come up with some creative ways to measure and resize the images to fit.”

All told, the project took a year to complete, with installers working two to three days a week (with temperatures inside the HVAC-less Milton ranging from 50 to 100 degrees F) and vinyl being cut nearly every day. “This job was unique and exciting because it allowed us to combine state-of-the-art computer design, large-format printing and cutting, and hand painting to recreate an accurate historical display,” says Amidon. “The historical society and the client were extremely pleased with the way we were able to recreate the images with such stunning accuracy.”

Tenants to start moving into The Milton in next 30 days, Michigan Avenue back open
(Source: WWMT.com)